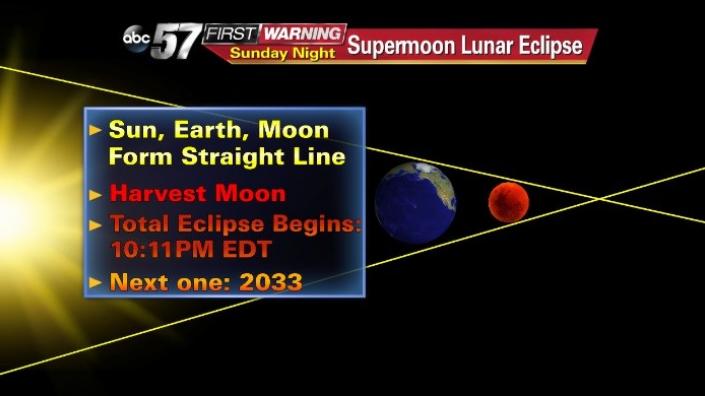 Keep your eyes to the sky this Sunday night for the rare celestial event known as the Supermoon Lunar eclipse.  What is so rare about this event is that three different features come together and the last time all three coincided was 1982.

It is called a “super” moon since the moon is at its closest point to the Earth in its orbit, making it look much brighter and larger in the night sky.  For a lunar eclipse to occur, the sun, Earth, moon must form a straight line, with the earth moving in between the sun and the moon.  Therefore, the moon falls into the Earth’s shadow.  The sun’s rays still find its way around the Earth to reach the moon, but this gives the moon an orange-red tint since the rays pass through the Earth’s atmosphere and scatter.  Since the moon will have a reddish glow, it is also called a “Blood Moon.” (Fast facts: Fig. 1)

If you miss this Supermoon Lunar Eclipse, the next time we will be able to have these three features come together (lunar eclipse, supermoon, blood moon) will be 18 years from now: 2033.

We’ll be competing with cloud cover late Sunday night, but at least we’ll be remaining dry.  Temperatures start off in the mid 60s when the partial eclipse begins and eventually drop off to near 60° by the time the eclipse ends, so a light jacket might be needed. (Fig. 3).

Stay tuned to ABC57 News at 10PM on the CW25 and at 11PM on ABC57 Sunday night as we’ll show real-time video of the Supermoon Lunar eclipse from our cameras outside the studio.