#SuperSnow57 drops more snow than the monthly average for February 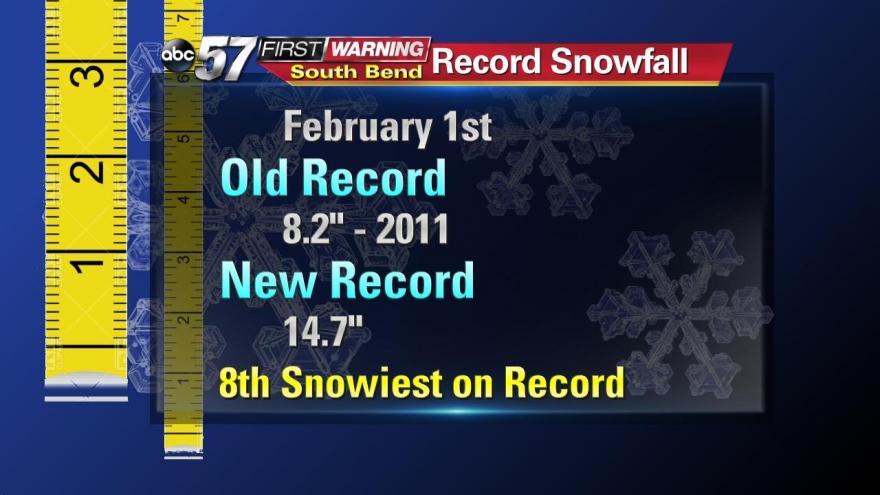 Super Snow Sunday (#SuperSnow57) was a day that nearly shut-down most of Michiana with  heavy snowfall for more than 24 hours. This seems to be the continuing trend for winter 2015. When it snows it seems to come all at once, and then a prolonged break. So where are we now and what can we expect with a month left in winter?

The snow storm that brought record daily snowfall for the first day of February was the 8th snowiest single day on record ( Fig 1). Most of Michiana saw between 10 and 14 inches of snow, with localized amounts topping 20 inches (Fig 2).

The more telling sign of this bi-polar season has been the shift between above and below normal snowfall. We ended the month of January with below average snowfall, after starting the month with 20 inches of snow.

As of February 2nd we're not only back ahead on the season (Fig 3), we've already topped the monthly average for February and almost as much as we saw February 2014 (Fig 4).

Looking at medium to long range models, a rather volatile pattern continues in the jet stream that will bring some swings in temperature. Highs in the mid 30's to near or subzero lows, an up and down pattern through the middle of the month. This will also keep the chance for round after round of snow in the forecast (Some light, some possibly heavy).

Longer range outlooks do hint and a possible moderation of this pattern by the end of the month becoming less snowy and milder.

So the outlook for February will be cold and snowy on the month as a whole with some improvement by the end of the month (Fig 5).

Get the latest 10-day Forecast here.