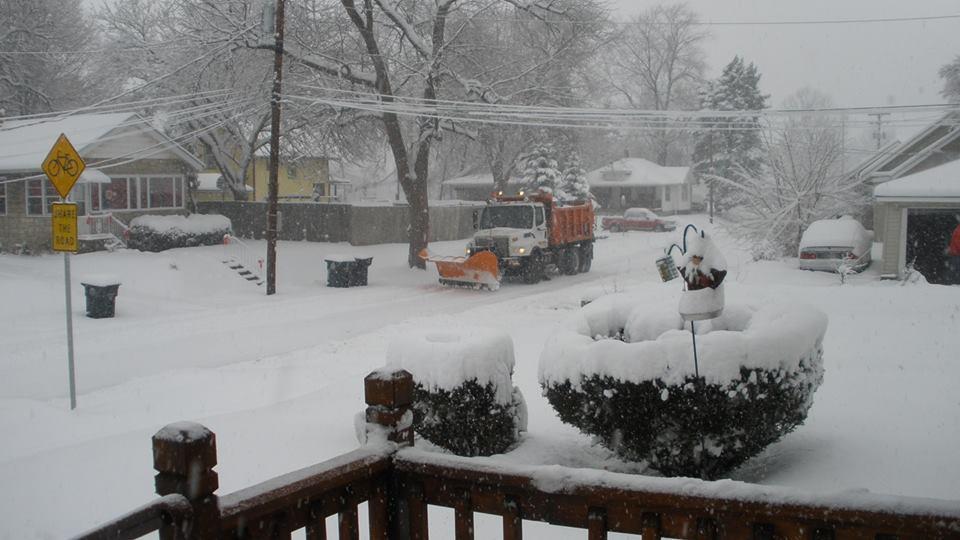 Not only is it hard to believe that Super Bowl 50 is right around the corner, but this also means that it has been one whole year since #SuperSnow57.   Yes, this Sunday, January 31st, marks the one year anniversary since the first snowflakes started to accumulate in Michiana and continued over the next 48 hours.  Over those 48 hours, the snow started to pick up in intensity.  By the early morning hours of February 1st, 2015, Super Bowl Sunday, the light snow had turned into a heavy, dense snow, producing snowfall rates up to 1 to 2 inches per hour in spots. Not only did the snow pick up overnight, but the winds howled out of the west, reducing visibility due to blowing snow.  Drifting snow was also a problem due to the amount of snowfall and the gusty winds, creating treacherous road conditions for anyone traveling to and from family and friends homes for Super Bowl watch parties.  Near whiteout conditions were reported along major roadways and as the snow piled up on the roads, compact cars were getting stuck on top of the snow.  With numerous cars getting stuck in the snow, many chose to stay inside and let the snow just pile up, like this viewer photo: Viewer photo of car buried in snow after #SuperSnow57 This photo was taken along Twyckenham Dr. in South Bend by the University of Notre Dame.  That snow pile is not a curb, but the turning lane for drivers to make lefts to go towards Notre Dame. As the snow picked up, roads became snow covered and visibility was reduced to less than 200 yards in some spots.  This photo above was taken in the ABC57 Mobile Weather Tracker on Feb. 1st, 2015 along US-20 West Bound towards South Bend. Snow blanketed the area and reduced visibility. This photo submitted by Paul. Snow plows were busy over the weekend and into the following work week clearing the snow.  This photo submitted by Gaz in South Bend. Others decided to start playing in the snow.  This photo submitted by Melissa in Warsaw during our #SuperSnow57 coverage.

By the early morning hours of February 2, 2015, the snow tapered off and Michiana was blanketed in nearly two feet of snow in spots due to drifting and blowing snow.  The heaviest accumulation was seen in LaPorte, Elkhart, & Cass County [MI] where some towns reported at least 20.0” of snow.  Here’s a look at some of the snowfall totals from across the area provided by the National Weather Service of Northern Indiana: Here at ABC57 News, we strive to make sure to protect and prepare you and your family before an impending snow storm or severe weather event, which is why we created the hashtag for social media, #SuperSnow57, to share the information quickly and efficiently while also gathering photos that viewers were sharing.  Our team weather coverage for #SuperSnow57 is Emmy-nominated due to our dedication to making sure everyone in Michiana is safe whenever inclement weather takes aim on our area.