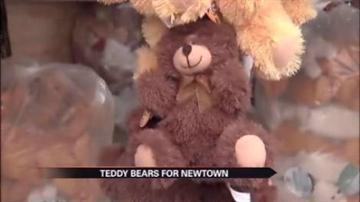 NEWTOWN, Conn. -- The outpouring of support for the Connecticut School Shooting has really been wide spread and Sandy victims are helping the school shooting victims.

Folks that were affected by Superstorm Sandy put together an effort to bring Connecticut School Shooting victims teddy bears.

They called the toy drive "Operation Kid Comfort" and with the help of a volunteer fire department, folks in Rockaway Point, New York drove bears to Newtown.

"There's no words for the loss that this town's feeling and basically we've had so much help we wanted to pay it forward and try to help somebody else," said Maura Buckley, Toy Drive Organizer.

This effort started after a Superstorm Sandy victim was given a teddy bear to help cope. They thought the same thing could be done for the victims of the school shooting.