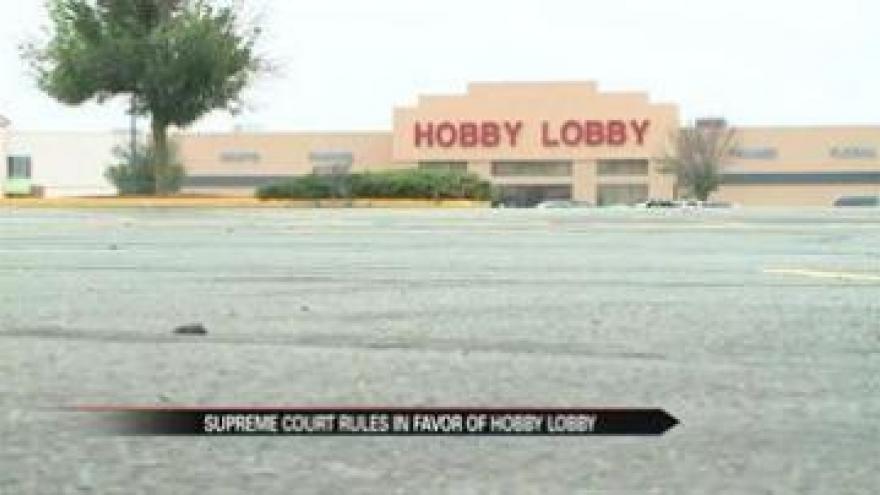 SOUTH BEND, Ind. -- The Supreme Court ruled Monday that closely held companies, like Hobby Lobby and Conestoga Wood Specialties, cannot be required to pay to cover some types of contraceptives for their employees.

The co-founders of Hobby Lobby wasted no time in releasing a video with their reaction to the ruling.

"America is a country founded on and sustained by religious liberty. It's been a long journey but an important one for our family and all those who wish to be guided in all areas of life, including businesses, by faith and conscience," said Barbara Green, co-founder of Hobby Lobby.

Many Michiana residents said they didn't think the ruling was a threat to women's health because there are other low-cost birth control options.

Barbara Williams believes the companies should stand up for their religious beliefs.

"If a family owns a business in the United States and it's their religious belief not to provide birth control, artificial contraception, then they should be allowed to run their business according to their beliefs," said Williams.

Some said the Supreme Court's decision protects our freedom.

"I think it should be a personal decision on the part of the individual. If they want to use birth control, it shouldn't be up to your work place to decide if you do or don't, or if it's not covered or not," said Adrianne Stokely.

"It is unbelievable that in 2014, we are still fighting over access to birth control. Today's U.S. Supreme Court decision means countless women, already struggling to make ends meet, will not have the benefit of the family planning coverage provided to all others under the Affordable Care Act."

Williams says there are other options available.

"I think there's plenty of access for those who wish to have that and there's certainly a variety of other options as well," said Williams.

"One of the good things is they still do have Planned Parenthood and stuff so you can get birth control at a low cost if you decide that's what you want to use and what you want to do so I do think it's a good thing we have that so that way we're not just relying on your work place," said Stokely.

The University of Notre Dame is one of the largest employers in Michiana-and is also involved in a similar lawsuit regarding the birth control mandate. The university released the following statement:

While our attorneys are still assessing it, the decision is an important and encouraging victory for religious liberty, which is at the heart of our lawsuit