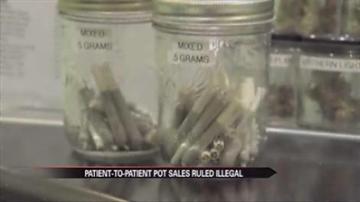 DOWAGIAC, Mich. -- Michigan voters approved the use of marijuana for certain illnesses back in 2008. Friday’s Supreme Court ruling leaves users with only two options for getting it.

Dr Christopher Prince is an ER doctor by trade, but opened the U-Med center in Sister Lakes Michigan to help those seeking certification for medicinal marijuana.

"What we do- is after we evaluate and review their medical records, the medical records that they bring in, they're examined and then we determine whether or not they're actually qualified,” said Prince.

Once a patient is qualified by Dr. Prince, it's up to the state to grant them a medical marijuana card.

"A family member of mine had a condition in which they decided they were going to try to use the marijuana and they did. And over an eight month period of time I watched that individual get better,” said Prince.

"The problem is there's no specific law as to where you can get the marijuana to start from. There's really no place--and I put this in quotes--that you can legally get the plants to go,” said Prince.

The ruling requires the state's 126,000 patients to grow their own marijuana or seek a state-licensed caregiver who can grow it.

"A lot of people are too sick to grow it themselves or they don't have the means to do it, or they may live in a subsidized housing and they can't do it,” said Leannette Garrison of U-Med Center.

Garrison said her patients view it as a normal method for pain relief and don't enjoy jumping through hoops to get it.

The U-Med Center was pretty busy Friday. It's the first step for many to getting a card for medicinal marijuana.