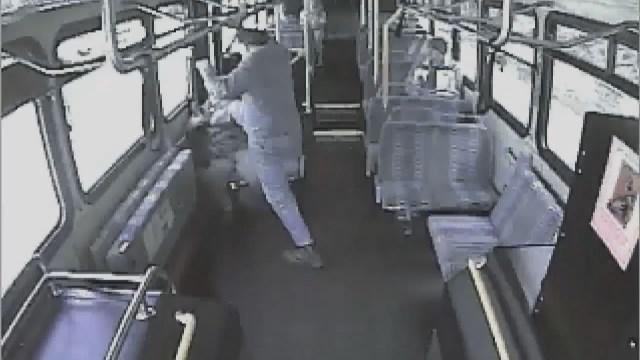 PORT ANGELES, Wash. (ABC News) -- A 59-year-old Port Angeles man is being held on $30,000 bail, accused of kicking and choking a passenger on a public bus and then attacking the bus driver. The assault was captured on a number of surveillance cameras on-board the vehicle.

Riley E. White is facing charges of felony assault and harassment. Investigators say White kicked a passenger in the head about a minute after she boarded a bus near the Clallam County Fairgrounds Saturday and then proceeded to try to choke her.

Passengers described the attack as "vicious" and "unprovoked," wrote Officer David Dombrowski of the Port Angeles Police Department in an incident report. The 80-year-old victim "had a profuse amount of blood covering her face" when officers responded to the scene, Dombrowski added.

Detectives believe White knew the victim, but they are not sure why he allegedly attacked her.

Surveillance video shows the bus driver hearing the victim screaming. The driver then grinds the bus to a halt and tries to pull the attacker off of the woman, but the man appears to choke the driver.

A camera facing the back of the bus show passengers running out a back door. One is on the phone with 911 calling for help.

"Emergency! Emergency!" the driver is heard yelling into the radio. "Emergency! I have an assault on the bus -- a passenger and myself. Please call emergency services. The individual is still on the bus!"

"You're evicted from the bus. Get out now," the man can be heard saying to the first victim. He then yells at the bus driver to close all the doors.

"Go check the other door and I'll check this one," the driver says.

As soon as the man looks the other way, the driver turns the battery off, runs off the bus, and closes the doors, effectively trapping the man inside. Without a working battery, he couldn't open the doors or start the bus and drive away, police said.

White is facing two counts of felony assault and one count of felony harassment.