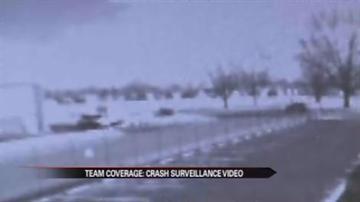 Plastic Solutions Incorporated has 28 cameras positioned inside and outside their building for security and insurance.

One of the IT specialists was surprised when he reviewed video from their camera that was pointing in the direction where the plane went down.

"Here he comes at the top of the screen,” said Steve Eckerman of Plastic Solutions, Inc.

It's hard to make out, but you can see the plane in the surveillance video.

"I was able to catch the plane on this camera here out of our east parking lot,” said Eckerman.

He was shocked when he realized the video captured the plane's final moments.

Hoosier Tank and Manufacturing down the street also captured parts of the aftermath on one of its company's surveillance cameras which was mounted on the southeast side of the building.

"We've got the emergency vehicles responding several minutes after the crash,” said Mick Horvath of Hoosier Tank and Manufacturing, Inc.

Several of their employees gathered --checking out the video wondering what happened on board the plane that made it go down.

"We actually have an employee that lives right down the street like three houses away from it where it actually happened,” said Horvath.

Management at Plastic Solutions says the South Bend Police Department already paid them a visit requesting a copy of the surveillance video to forward to the NTSB for its investigation.