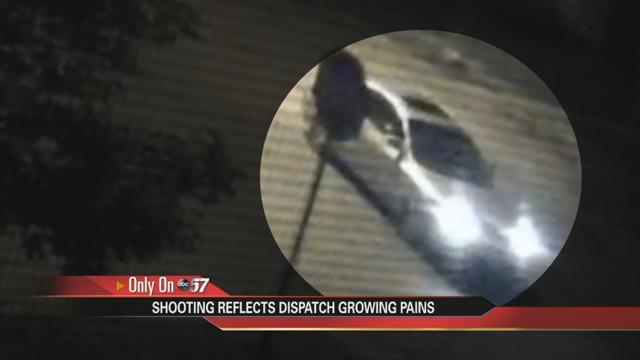 SOUTH BEND, Ind. -- It's a surveillance video that might shock you. It's an up close look at a shooting in a South Bend neighborhood but the story is what happened after those shots were fired, or what didn't happen.

There have been a lot of growing pains with the St. Joseph County dispatch center after their merge.

In the wee hours of March 23, 2015, coming off the heels of South Bend's 150th birthday celebration, most party goers are tucked in for the night but at 2:30 in the morning on the corner of Cushing and Lindsay Street, it's a different story.

In this surveillance video sent to ABC 57 News by Common Council President, Tim Scott, one of his constituents had their cameras rolling, as the video shows what looks like a dark colored car quickly turn onto Lindsay.

Shortly after, it appears as though a silver car speeds by on Cushing. It looks like the dark color was evading the other, and thinks they got away. The dark color car starts backing up, as if they're trying to leave the scene, but just as they make it out to the intersection, they're met again by the silver car and multiple shots ring out.

ABC 57 News counted 12 shots being fired from the silver car.

"We've never experienced shots that were this close," says Cathy Stoner who lives on Lindsay Street and called 911 that night.

Stoner says dispatch told her they were handling a lot of calls at that time but officers were on the way.

15 minutes go by and Stoner says no one showed up. When Stoner called again, she says the Dispatcher told her the shooting was actually on Blaine Street which is 5 blocks away.

Stoner told the Dispatcher that must be a separate incident because she heard the shots right outside her window.

"I mean I think I know when there are shots right outside my house," says Stoner.

After waiting a little longer, Stoner says no  one came.

"Somebody could have been laying in the street," says Stoner.

It was not until the next morning, when Stoner says she noticed the damage to her car from the stray bullets.

"I was trying to get somebody to come out this was like 9:00 the next morning," says Stoner. "I look at the back of my car and it was shattered."

A scary experience, one a few South Bend Police Officers have said to ABC 57 News, should have never happened.

Stoner says, it was also a random act for her neighborhood.

"We're not planning on moving any time soon," says Stoner.

The Dispatchers are hoping to be recognized as a Union so they can fight for better wages and better work environments, all with the goal of stopping mishaps like this one.