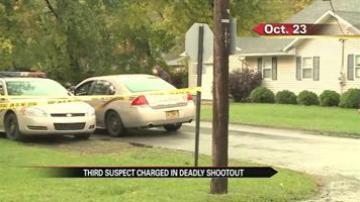 A man who was originally charged with robbery, burglary and murder in a shooting that happened on Warrick Street in South Bend was sentenced Thursday.

In January, De'Andre Moore pleaded guilty to one count of robbery a class A felony. The burglary and murder charges were dismissed as part of the agreement.

In court Thursday, a judge sentenced Moore to 40 years in prison.

Mario McGrew was also charged in this case. He also agreed to plead guilty.

The third suspect in the case, Shawn Alexander, pleaded guilty to murder in November 2015 and was sentenced to 50 years in prison. He received credit for 788 days served.

The charges of burglary and robbery against Alexander were dismissed.