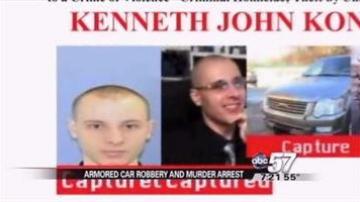 PITTSBURG, Pa.-- A brutal murder in February has finally lead to an arrest.

The FBI has arrested Ken Konias, who was suspected of robbing his own armored car and killing his co-worker.

Investigators found the man when some Floridians he confided in called the police.

After the shooting police said Konias stashed some of the money at his grandmother's grave site, and then reportedly called his mother to tell her she should "go see grandma."