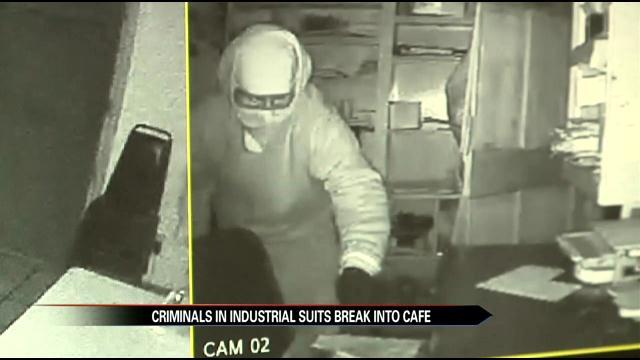 Two suspects wearing hazardous material suits ransacked the Bravo Cafe in Osceola and it was all caught on camera. The owner said there is over $1,000 in damage and an undisclosed amount of cash is missing.

Police said the burglary happened between 1a.m. and 5a.m. on Monday. Co-owner George Limberopoulos said the suspects were carrying crowbars in the surveillance video.

In the video the suspects were wearing gloves with duct tape around their wrists so investigators couldn't obtain their DNA.

Limberopoulos said, "Obviously they have masks on and you can tell they're wearing gloves and they have some type of tape that tapes their gloves to their sleeves.”

Gebo said, "The holiday season is coming up and people need money. Right now we have cars being broken into, houses broke into, businesses broken into, 'tis the season' and we have to expect that every year."

Any tips on this case can be directed to Captain Rulli at the Mishawaka Police Department.

Limberopoulos said, “It's kinda hard, you work all day and you're making an honest living you have employees and customers that are affected too. Maybe not directly but it does affect the whole community.”