Suspects shooting at pedestrians with paintballs 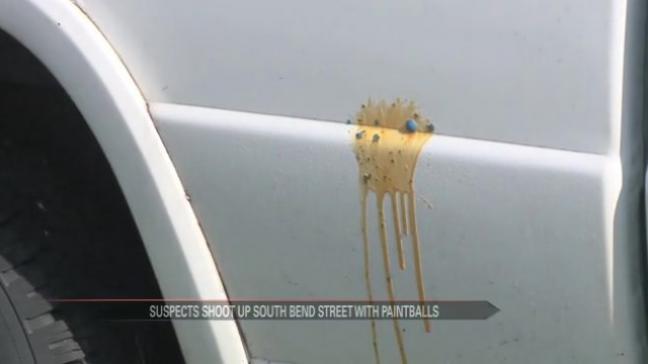 On Thursday police were searching for several suspects who were shooting paintballs at cars, pedestrians, and homes on Fox and South Michigan Street.

Ken Lukomski said, “Looks like we got four shots! 1, 2, 3, and then one on the back window from when they finally turned the corner.”

Lukomski said his neighbor's truck got pelted with paint around 2:30 p.m. on Thursday.

He said his roommate was hit in the thigh when he was walking down the street with a friend.

Lukomski said, “The female that was hit took cover behind that trailer because she wasn't sure if it was a real weapon! She didn't hear the pops but she felt the impact. And then as the vehicle came around this way they kept shooting and hit the back of the house! Which for a paintball gun is a significant distance. I think it's a competition gun because it hit over here on the house!”

Neighbors said they were thankful that no one was seriously injured.

Lukomski said, “I've seen actual real shootings here before so when we're in the neighborhood that we're in, you never take anything for granted. You don't know what's in those paintballs. It could be gasoline, brake fluid or they could be frozen which are almost like a shotgun."

If you have any information, call the South Bend Police Department.