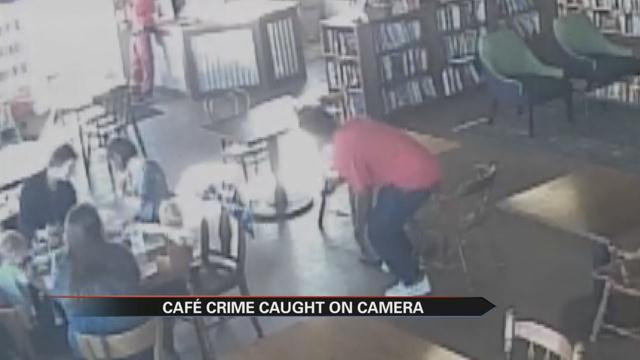 A robbery has left the staff of a popular Benton Harbor café motivated to continue improving the community by providing people with criminal records a second chance.

“There was no hint or clue that something was about to happen,” Café Mosaic Manager Gabrielle Engle said.

It was a typical Tuesday morning inside Café Mosaic, on Main Street in Benton Harbor, until about 9:30 a.m.

That’s when a purse-snatching took place, and was caught on a security camera.

“So the choice he could’ve made was to be a part of our program and get on his way to sustainable employment,” Mosaic Executive Director Ric Pawloski said, referring to the purse snatcher. “And instead, [he] chose to steal somebody’s purse.”

The program Pawloski is talking about is ‘Jobs For Life,’ which is an employment skills program that helps people who have criminal pasts or are down on their luck get back on their feet.

“We have to do a better job of making sure the word gets out why we’re here, what we’re here for, and what you can do by being a part of this program,” Pawloski said.

Those who apply for the program take classes, start working at Mosaic’s café, resale store or with Harbor Shine Landscaping, and then they get help landing a permanent job.

Engle said the two thieves had come in asking about the program, and the security footage shows her telling one of them the director of the program would be in shortly.

“It was then about five minutes later that the man who stole the purse was sitting by himself and got up, snatched the purse, and ran out the door while his friend held the door open for him,” Engle said.

The victim ran after the suspects, convincing them to throw back her purse, but not her wallet.

Both are still on the run.

“The two suspects were wearing red shirts; one was wearing a red sweater,” Benton Harbor Police Detective Michael Harmon said. “Both had braids in their hair.”

Pawloski said it’s an ironic series of events in a place focused on improving the community.

“This is a place where you can make a change and get on a different path, and stay away from the kind of thing that happened here [Tuesday],” Pawloski said.

The Benton Harbor Police Department is offering a reward of up to $1,000 for information leading to the arrests of the suspects.

Pawloski said both suspects would “absolutely” be welcome to apply for the ‘Jobs For Life’ program if they were interested, once they are caught and held responsible for what they did.