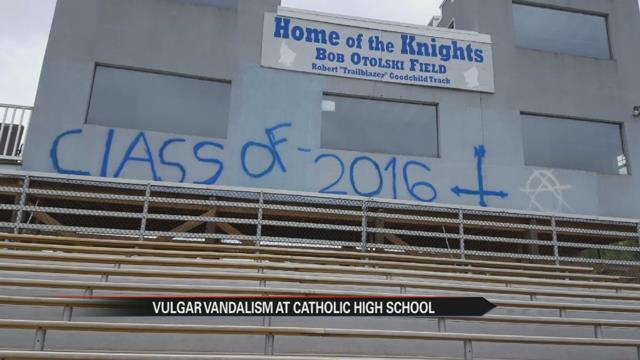 Possible vandalism at a Mishawaka high school has some neighbors concerned and confused.

The graffiti includes a swastika, “Jesus is dead,” an anarchy symbol, an upside down cross, and a”class of 2016.”

“It’s very surprising what they did to a school,” Tammy Heater, who lives behind the school said.

Another neighbor has a similar sentiment.

“People shouldn’t be doing that at a Catholic school to start out with. I’m Catholic myself,” Jack Russell Jr. said.

Russell has lived behind the school for two years and says he’s never seen anything like it.

Whatever graffiti there might have been is now covered up.

The school refused to let an ABC 57 reporter speak with the principal on the matter, nor were cameras allowed on the property.

Mishawaka Police say they didn’t receive any calls about it this weekend, and when they called to check up Monday, the school didn’t want an officer to show up.

Meanwhile neighbors have their own theories, from gangs to a senior prank.

Either way, they don’t approve of the damage.

“Kids, if you’re graduating from high school and want to play a prank, play something that’s reasonable, not painting an item on school property,” Heater said.