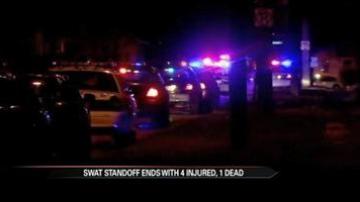 INDIANAPOLIS -- Four undercover drug officers are recovering from gunshot wounds and a man is dead after a shootout in Indianapolis.

The gunfire erupted on State Avenue at a house that police say was a drug house.

SWAT team officers and undercover drug officers shot and killed 27-year-old Andrew Sizemore after he fired on them from inside the house.

"We are clear about the message we are sending to our citizens. We are going to safeguard you and if it means putting our lives in harm’s way, we are going to do that," said Rick Hite of the Indianapolis Metro Police Department.

After the raid, police say they found stolen items, narcotics, and other drugs adding up to more than $750,000 in street value.

The injured officers are expected to be okay.