SWAT team brought in for standoff in Mishawaka 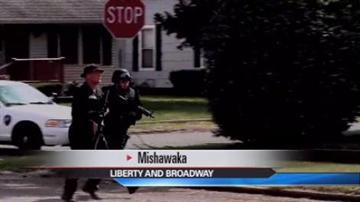 MISHAWAKA, Ind. --Mishawaka Police had their hands full this holiday weekend with a stand-off that lasted four hours and warranted the SWAT team.

Officers say around 3:30 p.m. Sunday, a man barricaded himself in a Broadway Street home with a gun.

“There was cops everywhere with guns drawn,” said Mary Castillo.

Mishawaka Lieutenant Tim Williams says this all started with an incident that happened earlier in the day on the 1700 block of Homewood Street.

“A criminal recklessness incident that happened with a firearm,” said Williams.

Officers saw the suspect in front of his home on the 500 block of Broadway, that’s when the armed suspect ran in his home and a standoff began.

Broadway was blocked off and neighbors had to be evacuated.

“They just told me to get out of the house I need to evacuate,” said Castillo.

The SWAT team armed with assault rifles and tear gas were brought in to apprehend the suspect.

They set off flash bangs and tear gas to try and get the suspect out.

Then they threw a cell phone in the suspect’s living room to communicate with him.

They tried to negotiate with him over the megaphone—offering him medical treatment and asking if he was okay.

Finally after four hours, the tear gas got to the suspect and he gave himself up.

He was transported to the hospital for medical treatment and was arrested.

Castillo says she has never seen anything like this and she is just glad officers caught the suspect without anyone being harmed.

“Not around here no that’s why I was pretty shocked,” said Castillo.

The suspect was booked into the Saint Joseph County Jail.  His name will not be released until formal charges have been filed.