Swimmer to pull ton of bricks for charity 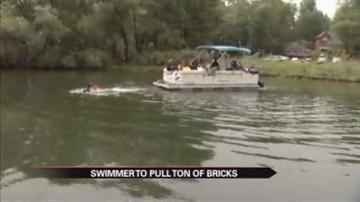 LEIGHTON TOWNSHIP, Mich. -- A Michigan man is turning himself into a human tug-boat to raise money for Habitat for Humanity.

Jim Dreyer, 49, who is known as The Shark, has set swimming records across all five Great Lakes.

The ultra marathoner plans to swim 22-miles across a Michigan lake while towing a ton of bricks.

He will pull four 10-foot platforms loaded with 500 pounds of bricks.

Those bricks will be used to help build homes for people who need them.

For the next two months he will train four-days a week. At one training session he pulled a pontoon boat through the water filled with people weighing 5,000 pounds.

"That pain is symbolic of the pain felt by Michigan families who are trying to keep their heads above water," said Dreyer.

If he is able to finish that swim in August he will set a world record.

Meanwhile, he is raising the $80,000 it costs Habitat to build a home for a family.