Syria: US, Russia, regional powers fail to reach breakthrough in talks on conflict 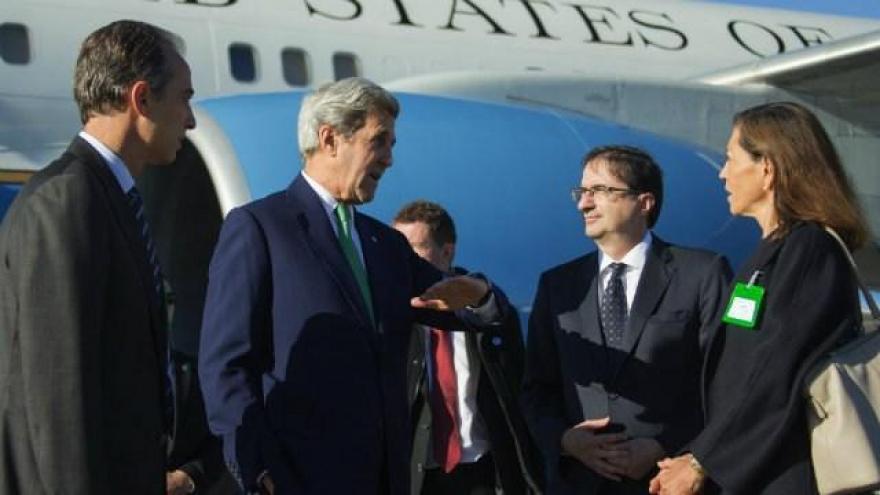 (CNN) -- Talks in Switzerland on the crisis in Syria have ended with no apparent breakthrough.

Despite the lack of a breakthrough, Kerry said the parties reached a consensus on a "broad agreement" on a number of important points, specifically a "desired outcome on ending conflict," in his remarks to the press.

The US State Department said that Saudi Arabia, Qatar, Turkey, Iran, Egypt, Iraq and Jordan were among the regional powers represented.

Lavrov had previously said he had no special expectations for an outcome, while Kerry emphasized the need for an end to the fighting in Aleppo and the delivery of humanitarian aid.

International outcry has mounted over the plight of some quarter of a million civilians trapped in the Syrian city of Aleppo as the Syrian military, backed by Russian warplanes, pounds its streets into rubble.

The talks were only the latest in a long series that have, so far at least, done little to alleviate the suffering of those caught up in Syria's civil war of 5½ years.

It is debatable whether the meeting ever had the potential to become -- as some diplomats suggested -- a turning point in the intractable conflict.

CNN senior international correspondent Nic Robertson, in Lausanne, said ahead of the talks it was unclear whether a pause in hostilities to allow access for humanitarian aid into Aleppo was even on the table.

"But if you compare that with the ratcheting up of rhetoric and the increase in tensions between the United States and Russia over the issue of Syria, specifically over Aleppo, over the past couple of weeks, this does give Lavrov and Kerry a chance to reset that rhetoric and perhaps get back to some discussion," he said.

Washington called off bilateral talks with Russia over Syria this month following the collapse of a short-lived, US-Russia-brokered ceasefire in Aleppo and Syria's renewed offensive against the city's rebel-held east.

Ahead of the talks, the Russian foreign minister did little to boost hopes of a positive outcome.

Russian state news agency Tass quoted Lavrov as saying he had "no special expectations" for the meeting and that he wanted to "see first to what degree our partners are prepared to comply with UN Security Council resolutions."

However, he said, Russia will propose "concrete moves" to implement past Security Council resolutions on Syria and the earlier approved Russian-American agreements. Lavrov added that Western partners weren't engaging in "reciprocal steps" to settle the Syrian crisis.

There was also little optimism on show on the US side.

"I certainly don't want to overplay or underplay our expectations for Lausanne," State Department deputy spokesman Mark Toner told reporters Friday, adding that "the urgent need right now in front of us is some kind of cessation of hostilities, at least a significant reduction in the level of violence, certainly in and around Aleppo, and that's going to be a primary focus."

"I would just say that we're looking to get this multilateral effort and approach to Syria up and running," Toner said.

Kerry will go on to London for further talks Sunday with "key regional and international partners" on ending the violence in Syria and the resumption of humanitarian aid deliveries, the State Department said.

The United States, France and Britain are among Western powers to suggest in recent days that the Syrian regime and its Russian backers could be guilty of war crimes in Aleppo.

For his part, Syrian President Bashar al-Assad told a Russian newspaper Thursday there was no other option but "to clean" Aleppo and use it as a "springboard" to push rebel forces out of Syria.