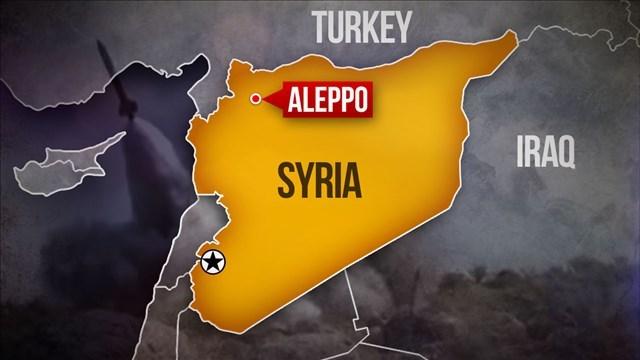 (CNN) -- Syrian regime forces have entered eastern Aleppo and retaken parts of its largest district, launching a long-threatened ground assault to wrest control of the area from rebels.

The troops' gains in the key neighborhood of Masaken Hanano were backed by regime airstrikes and marked the first time that government forces have taken a significant part of eastern Aleppo since rebels seized the area more than four years ago.

Government forces and armed groups loyal to Syrian President Bashar al-Assad began a bloody push toward eastern Aleppo on November 15 as warplanes decimated much of the zone with airstrikes following a three-week lull.

But on Saturday, they forces broke through rebel defense lines and entered the zone by ground from the northeast, according to civilians and the state-controlled Syrian Arab News Agency (SANA). Other troops are still pushing in from the south.

SANA reported that forces were now in "full control" of the area, but the UK-based Syrian Observatory for Human Rights and an activist group on the ground said only parts were in the hands of the regime and paramilitary gunmen.

CNN correspondents in the region say it would likely be days before the whole neighborhood is recaptured, as forces will have to clear buildings of potential booby traps and mines.

Aleppo is largely divided between government-controlled areas in the west and rebel positions in the east. Assad has vowed to retake the whole city, once Syria's commercial heart and now one of the last urban strongholds still in rebel hands.

Eastern Aleppo has become the wretched epicenter of Syria's brutal five-year civil war. Much of it has been reduced to rubble as regime forces backed by Russian air power have pounded the area while humanitarian crisis there become catastrophic.

Regime forces have besieged eastern Aleppo a number of times, most recently in July this year. The siege has cut off both the rebels and civilians from the outside world, leaving communities on the brink of starvation -- without sufficient food, clean water, fuel and medical supplies.

At least 46 people were killed and 325 wounded Saturday as regime forces entered the city 's east, according to the Syria Civil Defense volunteer rescue group -- also known as the White Helmets -- and the activist Aleppo Media Center.

The White Helmets also said at least 150 airstrikes and 2,500 artillery shells struck Aleppo and its surrounding countryside on Saturday.

The Syrian army said Sunday that its units had secured departure routes for 1,500 people from eastern Aleppo to regime-held areas, according to the state-run SANA news agency. It said that families had been transported to makeshift housing.

But some civilians told CNN that they would not leave Aleppo as they have nowhere else to go. Many say that so-called human corridors offered to them only funnel them to regime-held areas, where they fear reprisal or being separated from their families.

The recent resumption of airstrikes has seen devastating destruction in eastern Aleppo, and several chemical attacks on civilians have been reported, with children among victims. Hospitals have been bombed beyond use.

A UN investigation in late August found that chemical weapons had been used in Syria, both by the national air force and ISIS militants.

The November 15 offensive push toward eastern Aleppo was launched a day after the government sent a text message en masse to residents there, essentially telling them they should flee the city or die.

A girl's plea for help

Seven-year-old Bana lives under the constant cloud of war with her mother and younger brothers in rebel-held eastern Aleppo. One of her siblings has never known peace.

Bana, with the help of her mother Fatemeh, has been tweeting about the horrors of their daily life.

"Last message - under heavy bombardments now, can't be alive anymore. When we die, keep talking for 200,000 still inside. BYE.- Fatemah," one tweet read.

Fatemah told CNN their house has taken a direct hit. They are now on the street waiting for the planes to go and the shelling to stop before they can move or do anything.

"There is nothing left to be said, the whole world watched and was silent," Fatemah told CNN.

The UN agency for children, UNICEF, reported that nearly half a million children were living under siege across Syria, a figure that has doubled in less than a year.

The children live across 16 areas, cut off from aid and basic services, UNICEF said.

"For millions of human beings in Syria, life has become an endless nightmare -- in particular for the hundreds of thousands of children living under siege. Children are being killed and injured, too afraid to go to school or even play, surviving with little food and hardly any medicine," said UNICEF Executive Director Anthony Lake in a statement.

UNICEF estimated that 100,000 children are living under siege in eastern Aleppo alone. There are believed to be around 250,000 people trapped there.

The agency said parents had set up a network of playgrounds in basements so that children had a place to play.