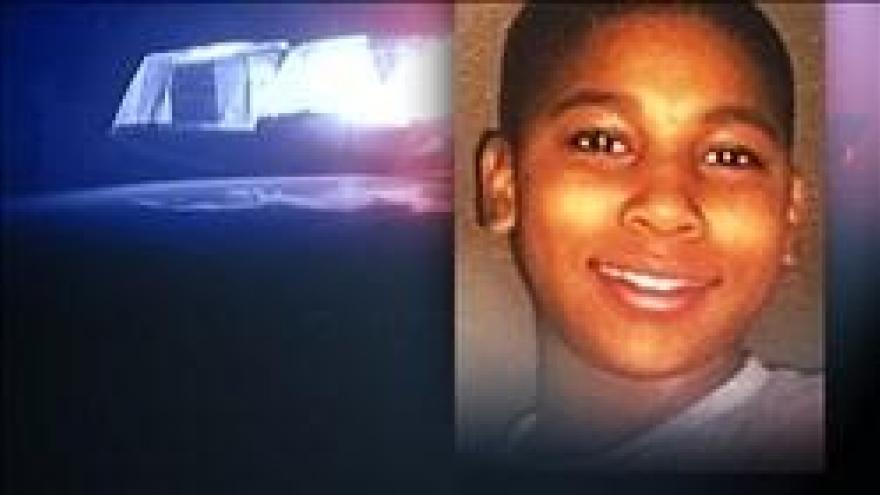 (CNN) -- Prosecutors say the police officer who killed 12-year-old Tamir Rice outside a Cleveland recreation center last year won't face criminal charges. Neither will the other officer who was with him.

"Given this perfect storm of human error, mistakes and communications by all involved that day, the evidence did not indicate criminal conduct by police," McGinty said.

Loehmann, an officer-in-training, shot 12-year-old Tamir on November 22, 2014. Garmback was training him.

"It is likely that Tamir, whose size made him look much older and who had been warned his pellet gun might get him into trouble that day, either intended to hand it over to the officers or show them it wasn't a real gun," McGinty said. "But there was no way for the officers to know that, because they saw the events rapidly unfolding in front of them from a very different perspective."

It was "reasonable" to believe the officer who killed the boy believed Tamir was a threat, the prosecutor said, adding that the toy gun looked real.

A recent FBI video analysis, the prosecutor said, showed Tamir "was drawing his gun from his waist as the police slid toward him and Officer Loehmann exited the car." After the shooting, officers discovered it was a toy gun.

The shooting swiftly sparked controversy given Tamir's age and the fact that he had a pellet gun, not a handgun.

In a statement released Monday evening, Tamir's family accused the prosecutor's office of mishandling the case.

"Prosecutor McGinty deliberately sabotaged the case, never advocating for my son, and acting instead like the police officers' defense attorney," the statement said. "In a time in which a nonindictment for two police officers who have killed an unarmed black child is business as usual, we mourn for Tamir, and for all of the black people who have been killed by the police without justice. In our view, this process demonstrates that race is still an extremely troubling and serious problem in our country and the criminal-justice system."

In an earlier statement, the family said it was grateful for community support, calling for those upset with how the case was handled to respond "peacefully and democratically."

"We renew our request that the Department of Justice step in to conduct a real investigation into this tragic shooting of a 12-year-old child," the family said.

The prosecutor hasn't responded to the family's accusations. On Monday, he repeatedly told reporters that no crime was committed by police and said he'd recommended the officers shouldn't be indicted.

The officers involved haven't spoken publicly about what happened that day. In a statement released on behalf of both officers by Loehmann's lawyer Monday, they said they were grateful for the grand jury's "thorough review of the facts" and hadn't spoken earlier because it would have been "prejudicial and irresponsible."

"We respect the justice system and the dedication of the jurors from our community," the statement released by attorney Henry Hilow said. "This case is a tragedy for the Rice family and officers involved. Our thoughts and prayers are with all."

The Cleveland Police Patrolmen's Association said it was pleased by what it called the grand jury's "thoughtful decision." But Steve Loomis, the union's president, said the decision not to indict the officers was no cause for celebration.

"While there is absolutely no upside to this issue," he said in a statement, "there are lessons that should and will be learned by all."

Police officials in Cleveland will conduct an administrative review of the shooting now that the criminal investigation is completed, Mayor Frank Jackson said Monday after prosecutors announced the grand jury's decision.

It's possible the police officers involved could face disciplinary action if the committee set to review the case determines policies or procedures were violated, Cleveland Police Chief Calvin Williams said.

A federal review of the case is ongoing.

"We will continue our independent review of this matter, assess all available materials and determine what actions are appropriate, given the strict burdens and requirements imposed by applicable federal civil rights laws," the U.S. Attorney's Office for Northern Ohio said Monday.

Civil courts may provide some accountability to Tamir's family "that they deserve," McGinty said.

No matter what happens next, the public is likely to be skeptical, given how long it took to complete the investigation and the prosecutor's comments about the case, CNN legal analyst Sunny Hostin said.

"This case screamed out for a special prosecutor," she said. "I think people will be uncomfortable with the process here. I think it doesn't take a year to investigate and present a case in front of the grand jury."

As a cold rain pelted Cleveland on Monday night, a group of protesters walked through the streets, chanting, "Hey hey, ho ho, these killer cops have got to go."

The November 2014 shooting unfolded shortly after a witness at the recreation center called 911, reporting there was "a guy with a pistol," adding that the weapon was "probably" fake.

Information that the gun the caller saw was probably not real and that the person holding it appeared to be a juvenile was not conveyed to Loehmann and Garmback, according to recordings that law enforcement released.

When the officers arrived they encountered a person who looked much older than 12 and in communication played for reporters Monday, one of the officers can be heard relaying that a person in their 20s had been shot.

Prosecutors described Tamir as very big for his age. He weighed 170 pounds, was 5 foot 7 and wore a size 36 pants.

The officers were "prepared to face a possible active shooter in a neighborhood with a history of violence," McGinty said. "There are, in fact, memorials to two slain Cleveland police officers in that very park, a short distance away, and both had been shot to death nearby in the line of duty. Police are trained that it only takes a third of a second or less to draw and fire a weapon at them. Therefore, they must react quickly to any threat."

Video of the incident shows a patrol car pull up on the snowy grass near a gazebo where Tamir is standing. Within seconds of arriving on the scene, Loehmann shoots the boy.

Several witnesses the prosecutors said were interviewed described seeing the boy throughout the day, removing the toy gun that a friend had given to him from his waistband and pointing it at people.

On Monday, officials showed a photo of the toy gun next to a real Colt model to illustrate how similar they appeared, especially when the toy gun's orange safety tip is removed.

Prosecutors said they hired an outside expert to evaluate video that was, on its own, too difficult to easily discern.

In their statement, Tamir's family blasted that move.

"It is unheard of, and highly improper, for a prosecutor to hire 'experts' to try to exonerate the targets of a grand jury investigation. These are the sort of 'experts' we would expect the officer's criminal-defense attorney to hire --- not the prosecutor."

The expert analysis included a statement by a 20-year veteran of the FBI and a former instructor at the agency's academy that Loehmann's response was reasonable, given what he knew at the time.

McGinty had previously said his office wasn't using the reports to reach a conclusion and that the grand jury would get to consider all the evidence to reach its decision.

Tamir's family also accused prosecutors of giving the officers special treatment by allowing them to submit written statements to the grand jury rather than testifying.

In June, McGinty released the Cuyahoga County Sheriff's Office report. Also that month -- in a nonbinding review of the case -- a Cleveland judge found probable cause for the charges of murder, involuntary manslaughter, reckless homicide, negligent homicide and dereliction of duty against Loehmann.