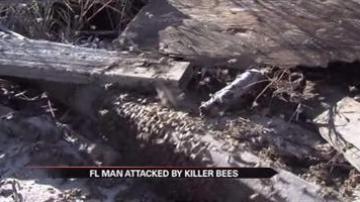 The employees said the bees came out of nowhere after they were accidentally disturbed.

Rodney Pugh was one of the employees attacked. He said it felt like a thousand little knives poking his body.

The medical staff removed more than 60 stingers from his back and neck.

Pugh and his co-worker were removing trash when they lifted an old tire and that was where the hive of killer bees was.

"So I'm trying to swat, and they say never swat bees, so they were all in my face, on my back, and in my shirt," said Pugh. "So, I jumped out of the payloader and ran for my office."

Because they were Africanized bees, they were relentless.

They chased Pugh 75 feet down the road.

Both park employees are expected to recover.