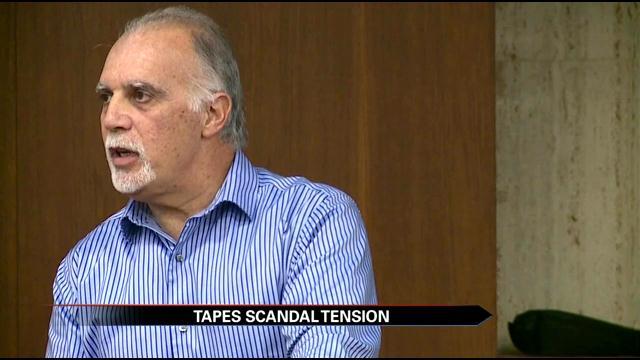 It was tense at Monday night's South Bend Common Council meeting because of a discussion about the city's tape scandal.

One side says the officers on those tapes said bad things and what was said will change the face of South Bend.

But the officers say they're good people and the city needs to stop wasting money.

For the first time in three years, every major player from the case was in the same room at the same time.

No sound was more dramatic than the words spoken by homicide commander Tim Corbett. His words were raw about race in South Bend.

Corbett explained one of the hardest parts of the job.

“Every day I deal with baby killers, people that are killing in this community,” says Corbett. “90-percent of homicides were black on black crime last year.”

he says the city, the council and whistle blowers like “People United for a Better Government” won't let the tape scandal go.

For 3 years, the city of South Bend has been involved in a wiretapping lawsuit with several officers from South Bend's Police Department and Metro Homicide.

The plaintiffs, including Corbett, allege their phone lines were recorded without their knowledge in violation of the wiretapping law.

The Court ruled in January that 7 of the 8 tapes in question could not be played because they were recorded inadvertently.

The fate of the eighth tape is in the hands of the court system.

Members of People United for a Better Government think something is up and the only way to solve the problem is if the tapes are played.

But another plaintiff on the case, Lieutenant David Wells, disagrees.

He believes his officers shouldn't have their names dragged through the mud.

“We're not going to go away, we're going to fight, you can giggle, you can follow us around, it doesn't matter,” says Corbett.

“I had hoped that the recent Federal ruling would bring an end to this drama and allow us to focus on community concerns and safety in our streets. But if the Council continues to press for access to private conversations, the individuals recorded have made it clear they will assert their legal rights, and the City will be drawn into further litigation at taxpayer expense.”

The mayor has also asked to meet with the council to work on this issue.