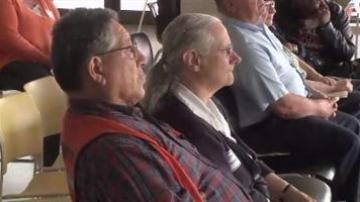 SOUTH BEND, Ind. -- In the midst of a rally to "release the tapes," South Bend Mayor Pete Buttigieg hosted his ninth "Mayor's Night In' event.

Despite all the buzz surrounding the ongoing tape scandal, Tuesday's event was proof that not everyone's top priority is wanting to listen to those tapes.

Some Common Council members and taxpayers say the tape scandal is taking away from real issues the city needs to be focusing on. Tuesday, a few concerned citizens came to sit down with the mayor, one-on-one, to remind him some issues are still a problem and that the progress is not where it should be.

Just like the tape scandal, the community's concerns are also hot topics that are all too familiar with the city -- from vacant houses and illegal trash dumping, to the Fellows Street construction project.

Paul Duda has been at the 'Mayor's Night In' event not once, but three times. His biggest concern? His neighborhood. "There is overgrowth at a lot of homes over there, the curbs are falling apart, and the value of the homes are just deteriorating," said Duda.

Duda took pictures of the vacant homes near his house. The brush so overgrown, it covers most of the home seen in one of his pictures. He also has shots of the trash that is still being dumped illegally in the alleys around his house.

His goal?  To get stricter ordinances in place, so that those who are responsible will be held accountable. Duba said, although the mayor is helping by holding these events, the progress has been slow. "It's very minute and there are still problems over there and it's not being address like it should be."

Then there is Rojene Rozmarynowski and her husband Frank. "I think it is a great idea, it's the first time we have been to it," said Rosmarynowski.

Time is money for the couple. They were told they would have to move and surrender their home because the area was going to be redeveloped to make way for U.S. 31. So, the couple bought a home and now the project is on hold.

"We were just told our situation would be looked in to, so we still don't know anything," said Rosmarynowski.

All are aware that their issues cannot be fixed overnight. Still, they hope the mayor will stop talking and start doing.

The next chance to meet up with Mayor Pete Buttigieg will be October 30 at the Rum Village Nature Center. That will also start at 5:30 p.m.