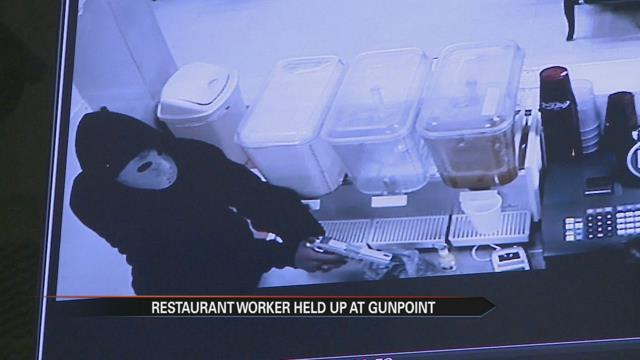 On Monday night Taqueria Tijuana was robbed at gun point. No one was hurt and employees say that it has been about four years since they were last robbed.

The restaurant is located on Prairie Street and now sits just under the recently opened over pass. Employees say the new convenience could actually contribute to crime.

“The one who came in with the gun, his eyes looked really really red,” says a waitress at Taqueria Tijuana.

She described the series of events in Spanish and did not want to give her name. She says a masked man pointed a gun at her demanding she empty the register.

The incident left her frightened and she says sleeping last night was a struggle.

“I’d close my eyes and see the man with the mask,” says the waitress.

Surveillance video shows two suspects running towards the restaurant. One stays outside the other is the masked man with a gun who demands money.

The waitress says there was one strange thing before the crime happened.

“The only car that was outside was the only thing suspicious. They had been outside for like 15 minutes,” says the waitress.

After reviewing the surveillance video employees say they are wary of a Chevrolet sedan that pulled up around 8:45 p.m.

A few minutes later the driver repositions the car to face the lot’s exit. The suspects did not flee in the sedan but instead they ran under the new over pass.

Employees at the restaurant say that the overpass is a great addition to the city but at night it can get very dark and secluded. They feel as though it may have created the perfect escape route.

“We haven’t heard of anything going on as far as crime because that [the over pass] has opened up,” says Sergeant Chris Snyder with the Elkhart Police Department.

Sergeant Snyder says if anything the Prairie Street Bridge makes that area more accessible to officers.

“With the overpass being open now it will make things a lot easier for our officers to get there in a more timely fashion,” says Sergeant Snyder.

“The alley back there they didn’t put lights in the back and I think that is going to result in more things happening,” says the waitress.

Police say they want patrons and employees to feel safe at Taqueria Tijuana and it is standard for them to increase patrol in an after a crime.

Not much information regarding suspects’ description is available. Police say the man in the mask was described as a slender black male. If you have any info you can contact the Elkhart Police Department.