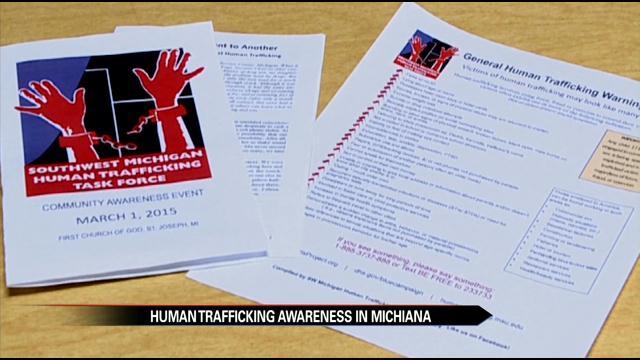 A community wide event called "Be the Change to Break the Chains" was held Sunday evening to raise awareness and educate the public on human trafficking.

The program was put on by the Southwest Michigan Human Trafficking Task Force and was held at the First Church of God in St. Joseph.

This task force is the third regional human trafficking task force in the state to be formed under the Michigan Human Trafficking Task Force, which is housed at the School of Criminal Justice at Michigan State University.

The event was to inform people of the warning signs and what to look for if they know someone who could be a victim of human trafficking.

Some of the warning signs of general trafficking victims include: false or no ID, lying about age or name, injuries, bruises, or extreme weight loss.

The founder of the Southwest Michigan Human Trafficking Task Force Cathy Knauf says she started this division back in 2012 after she realized there were other divisions but none in this part of the state.

“The more I learned about it [human trafficking], the more my heart just told me I had to do something about it,” said Knauf.

She says there is a common denominator that traffickers look for in their victims.

“Traffickers always look for vulnerable subjects, and they use that vulnerability for their greed,” Knauf said.

The Southwest Michigan Human Trafficking Task Force dedicates a lot of their efforts to train law enforcement officers in the state of Michigan on human trafficking.

They raise the money through their fundraising branch called “Planting Hope.”

Currently, they have trained more than 25-percent of law enforcement officers in the state and there are about 18,000 officers statewide.

The organization needs $3,000 to train more law enforcement officers at the next training in May.

Their goal is to raise that money through the selling of bracelets and 12 different jars that will be spread all across the community throughout the month of March.

If you would like to get involved in this program you can find out more by clicking here.

You can also learn more about human trafficking at these links provided:
PolarisProject.org
Dhs.gov/bluecampaign
Humantrafficking.msu.edu