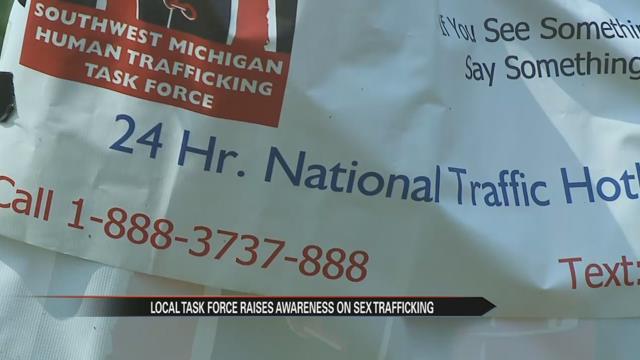 A local task force raised awareness about human sex trafficking during the Red Bud Motocross event. According to the Michigan Commission on Human Trafficking, over 300 cases of sex trafficking were reported in the state in the last two years.

As people head home from the holiday weekend, the task force is hoping people will help bring more victims to freedom.

McPherson is the pastor at First United Methodist in downtown Buchanan.

McPherson said, “As this crowd of people comes and goes for the Red Bud event which is a wonderful event but at the same time we know that in the background of that, there’s always these darker sides of humanity.”

McPherson said it's been reported that sex trafficking can happen surrounding sporting events which is why members of his church felt compelled to reach out to businesses in the area.

McPherson said, “If we can change the life for one person, it’s definitely worth it.”

McPherson said a simple question may save a person from a lifetime of sex slavery.

McPherson said, "Do you know where you’re going to sleep tonight? Do you have to ask for permission to use the bathroom?”

McPherson said, “A lot of people who are sex trafficked, that first happens when they’re 13 or 14 years old.”

For more information you can visit http://www.polarisproject.org/