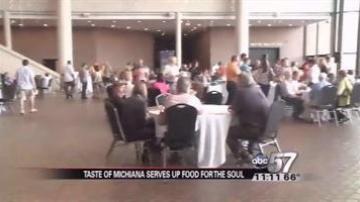 SOUTH BEND, Ind.-- With a taste of local food creations or a sip of wine, people were not only finding out what Michiana restaurants have to offer.  They were also offering financial support to the Life Treatment Center for drug and alcohol addiction.

For $25, people got to sample 25 restaurants at the Taste of Michiana Wednesday night.

Life Treatment Center Assistant Director Debbie Smith spent the night talking with guests at the taste of MIchiana, but back in 1984 her life was very different.

"27 years ago I was actually a heroin addict," said Smith.

She battled the addiction for 15 years, all the while raising three children.

"I did anything and everything i could to support my habit...it was quite a struggle," said Smith.

She finally realized she could not beat the disease on her own and sought help.

"If it weren't for treatment I probably wouldn't be alive today," said Smith.

And she says with the recent heroin epidemic across Indiana...

"In the past year we have seen at least seven heroin addicts every week," said Smith.

Many other people will need the Life Treatment Center to stay alive too.  She says is touched that MIchiana is willing to forget the stigma.

And help those who can not beat the disease on their own.

Smith says Life Treatment's goals was to have 400 people and they surpassed that within the first two hours of Taste of Michiana.