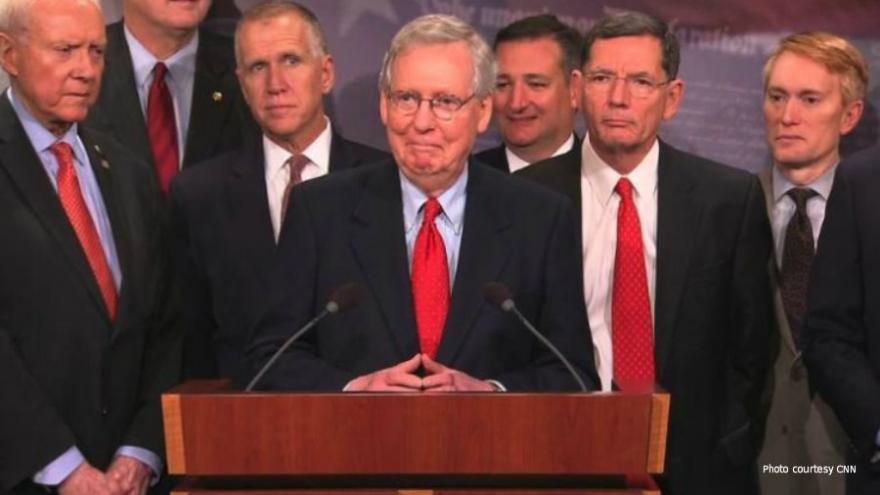 (CNN) -- Senators voted to strike language in the GOP tax bill that initially would have given a tax exemption exclusively to a small college in Michigan with multiple ties to the Trump administration.

The Cruz-Toomey language, by Republican Sens. Ted Cruz of Texas and Pat Toomey of Pennsylvania, would have reportedly benefited the conservative Hillsdale College, as it is the only higher education institution that meets the criteria detailed in bill's add-on, according to a Democratic aide.

The exemption was related to a proposed 1.4% excise tax for endowment investments.

The Democratic aide said the Senate GOP's bill included the excise tax for certain private universities that also have specific enrollment and endowment benchmarks, but the Toomey-Cruz proposal protected schools that do not accept federal funding under Title IX.

However, following criticism from the left, Republicans then edited the language to make the endowment requirement $500,000 per student, instead of the initial $250,000.

Hillsdale College's student paper, The Collegian, reported Thursday that the school's endowment is approximately $364,000 per student. This would have put the college under the $500,000 requirement to automatically be exempt from the 1.4% excise tax, however it would have no longer been the only college to qualify.

But the effort to carve out a provision benefiting the college that had connections to the Trump administration was continuously rejected after Democrats cried foul.

Sen. Jeff Merkley of Oregon proposed the amendment to strip the bill of the language entirely, which passed 52-48, with four Republicans joining their Democratic counterparts. Republican Sens. Susan Collins of Maine, Deb Fischer of Nebraska, John Kennedy of Louisiana and Lisa Murkowski of Alaska all voted to rid the bill of the proposal following the Democrats' brouhaha.

Sen. Toomey pushed back, and said it was a universal provision for any school that chose to take it.

Sen. Claire McCaskill, a Missouri Democrat, questioned the addition in a back-and-forth with Toomey on the floor Friday, as well as tweeting about the provision.

"Pretty sure we have just discovered an earmark for Hillsdale College/Betsy DeVos courtesy of Pat Toomey," McCaskill wrote, linking to an article from December 2016 that references President Donald Trump choosing DeVos for education secretary over Hillsdale College President Larry Arnn, while also detailing her own relations to the college.

The Democratic aide noted several officials in the Trump administration have ties to those who graduated from the liberal arts college, including DeVos' brother, Erik Prince.

The Senate had been scrambling to vote on the bill before the weekend, still writing parts of the legislation Friday, just hours before the vote. The bill passed in the Senate with 51 votes in the early hours of Saturday morning, mostly along party lines.