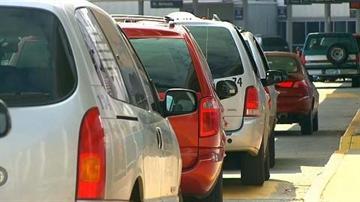 Last year, and for several Notre Dame football seasons, the city of South Bend has allowed cab companies to charge a special higher rate for service during home game weekends. Fare rates from the airport to downtown hotels or the University are typically $10 per person, or a $25 minimum for a single passenger.

Previously the rates went into effect at noon on Friday and went back to normal at noon on Sunday. According to cab drivers, the fees were not charged to normal everyday transportation away from these venues, and students didn’t have to pay the increased rates either.

The new ordinance only allows the increased rates to be charged on Saturdays during home games. Cab drivers say this is a blow to their ability to make money on their busiest time of the year.

Many feel their business is being targeted by the city, while other businesses like hotels, restaurants, even gas stations will be allowed to raise rates this coming weekend without the same restrictions. “It’s pretty upsetting because if everybody else can do it why can’t we,” said Daniel White, a driver who leases the cab he drives.

Some local hotels have a minimum three night booking out-of-town visitors must agree to, in addition to increased rates; rates that are sometimes 300 to 400 percent higher than normal.

It’s no secret that businesses in university towns thrive off of college business, especially college football. But not all cab drivers are upset. Jack Gildea has been driving a cab for a couple of years now. “I’m going to make money, absolutely, with everybody coming into town, everybody utilizing our services, I’m not really too worried about it,” said Gildea.

Meanwhile, Assistant City Attorney Ann Carol Nash says, this change was in the proposed ordinance for a while. She says, she was surprised no one voiced any concerns about it. Cab drivers say, it was a change that was conveniently left out of discussions.

Regardless, Nash says, she is more concerned about tourists getting a safe, comfortable ride without any surprises at the end of it. That was the reasoning behind her push for mandatory receipt offerings, and posting of all rates on both the exterior and interior of cabs.

Nash also says a large number of complaints come in after Home Game weekends, and reducing the ability for companies to charge the increased rate to a single day will help the city determine if a violation occurred.

But cab drivers aren’t buying it. They say the time it takes to drive someone from the airport downtown or to Notre Dame, at certain times during weekends when the university has a home game, is far longer than it normally would be.

They also say, if people are willing to pay increased rates to fly into South Bend Regional, stay at a hotel for a mandatory three night booking at an increased rate, purchase expensive tickets to the football game, and but high priced items inside the stadium, then they should have no trouble paying a little extra for a cab ride.

Nash disagrees, but she is willing to revisit the issue when they take up several other parts of the ordinance that were removed before it was passed. Nash wants to have the ordinance include a requirement for all cab companies to have all of their vehicles be uniform in color, and for all cabs to install video recording devices.

Cab drivers say, they will get through this weekend and then figure out what they want to do about this change.