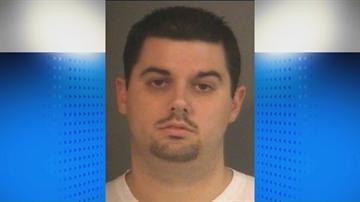 West, a 5th grade teacher, was taken away from the school by the St. Joseph County Special Victims Unit last Friday and arrested shortly afterward.

According to charging documents released to ABC 57, the mother of one of West’s former students came forward on October 2 saying she’d found inappropriate text messages from West on her daughter’s phone.  The student, now in 7th grade, said West had started communicating with her on Facebook after she graduated from his class in 2011 and began texting her shortly afterward.  West allegedly told the student to erase all messages from him, but her mother discovered some of them in July of 2012 and claimed she found 265 messages from West on her daughter’s phone.

Investigators found text conversations in which West allegedly wrote, “*takes off my shirt* is this ok?...*kisses more, slowly getting lower to your chest*...*gently kisses the soft skin all around ur bra*…*kisses u and gently traces ur bra with a finger*…babe, I am so turned on.”  According to court documents the asterisks are meant to indicate the sender is performing that act virtually.

When investigators interviewed West last Friday they say he waived his rights and confirmed his phone number matched the one from which the texts were sent to the student.  He also admitted to texting the student, but claimed to have never sent any inappropriate messages.  Police say West requested an attorney and was arrested when confronted about the explicit messages found on the victim’s phone.

West is facing one charge of inappropriate communication with a child, a class “A” misdemeanor.  He is scheduled to be arraigned on October 18.