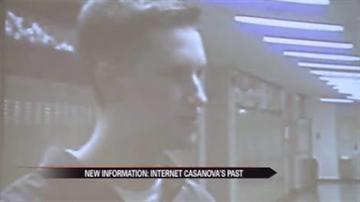 PLYMOUTH, Ind. --Dozens of women across the country are claiming Raymond Holycross, dubbed the Internet Casanova, is a liar and a thief. Teachers at his high school in Plymouth remember a much different young man.

His junior year of high school, after his mother died of cancer, Raymond Holycross moved in with his grandparents in Plymouth and started attending high school there.

David McKenzie was Holycross' broadcasting teacher during his senior year at Plymouth High School and says the young man was incredibly creative.

"Especially in the art area and of course in our broadcasting studio would spend a ton of time; and the products he produced were simply amazing,” Said McKenzie.

McKenzie showed us the 2001 senior video that Holycross had a significant hand in creating.

As a teenager, McKenzie describes Holycross as the typical boy next door and never observed the teen playing the Casanova role he is accused of now.

"I really thought we would be seeing him winning some awards; I didn't expect this to be the kind of interview I would be doing,” said McKenzie.

After graduating McKenzie says Holycross would come back and talk about attending a college specifically for media arts called Full Sail.

"I was incredibly proud of him, and as a broadcaster and what he was able to do and the things that he did show me, he continued to be very good at what he did,” said McKenzie.

But there are questions. How much of what he has told people about his accomplishments is true?

One of the things he has claimed is that he worked for WGN in Chicago.

"He was mostly working in their sports department doing the grunt work that typically people start out doing,” said McKenzie.

The people we talked to from WGN didn't recognize the name.

In light of what has come out about his former student, McKenzie says, he is disappointed.  The young man he remembers is not the same as the one he's learning about now.

"I just think it's very unfortunate for him that he made those choices if that's really what did happen,” said McKenzie.