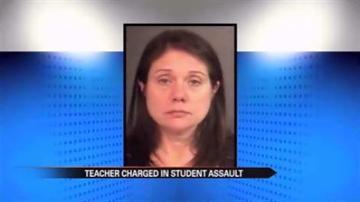 ST. JOSEPH COUNTY, Ind. -- Saundra Yute was in her first year as the special education teacher at Laville Jr-Sr High School when she resigned her position after being accused of spanking a 12 year old special needs child.

"We took immediate action, The teacher had a resignation letter on my desk within 20 minutes. We called child protective services, the teacher came later that evening we got her belongings, she then left the building and she hasn't come back since,” said Principal Jeremy Tucker.

Yute was arraigned on felony charges Friday afternoon. She is out on a $500 bond.

According to court documents, Yute became upset when the child urinated on the bathroom floor in front of her.

A teacher's aide says Yute was so angry she yelled at the aide, then slapped the child and spanked her bare bottom.

After the mess was cleaned up, the aide reported the incident to the principal.

"There's a fine, there's not even a fine line. There's just a line set in stone that says I do not touch a child,” said Tucker.

According to court documents -- Yute admitted to striking the child and resigned.

She had been in the position for less than a year and had no experience teaching special needs.

So why was she there?

"When we first posted that position no one applied with the special education certification license, so the next avenue we took was to hire a certified teacher who we could put on emergency permit,” said Tucker.

The school followed the rules, but that doesn't change what happened.

"As a building principal I am extremely sorry to the community and the classroom that this happened in. However from this point on we are going to move forward and continue to show we have a safe school building,” said Tucker.

Yute was charged with battery to a child.