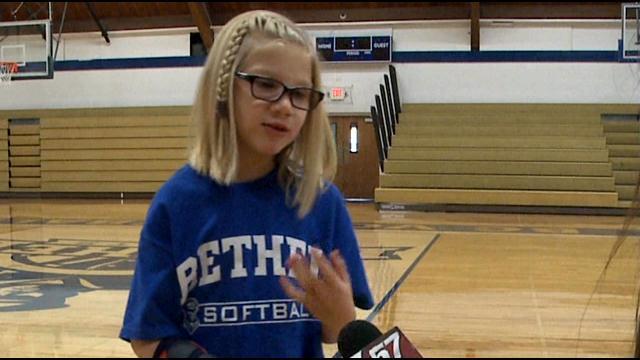 One Michiana college is giving back to our community in a special way. The program is called Team IMPACT, and it pairs physically or mentally disabled kids with a college athletic team.

Mia Sollars is paired with the softball team at Bethel College, and she spends time with them year-round as a teammate, sister and friend.

“It's fun to hang out with girls,” Sollars said.

Sollars is like most seven-year-old girls. She loves music, dancing and most of all, sports.

“We signed Mia and she became a Pilot back in March and is involved with the team as much as possible,” Bethel College softball head coach Megan Hastings said.

Mia is the youngest of three older brothers and says she's never had sisters.

“I don't hang out with girls that much because I'm the only one,” Sollars said.

That is, until she joined the Bethel Pilots softball team through Team IMPACT.

“Team Impact is an organization out of Quincy, Massachusetts just south of Boston and they help set up children with physical or mental disabilities with collegiate teams,” Hastings said.

Mia suffered a stroke at six-months-old. For the last six and a half years, she's endured surgeries and weekly therapy to regain strength in the right side of her body. She celebrates birthdays and holidays and just hangs out with the team, which she says helps distract her from the therapy and doctors appointments.

The program hasn't only impacted Mia.

“Mia being a part of us, it does open my eyes to the world and to the things that people do have to go through, the very bad things and they have to work hard to get what they want,” Bethel College softball player Crystal Markiewicz said.

But the softball team as well, and it is a relationship Mia's mother hopes opens others' eyes to how these disabilities aren't holding back kids like Mia.

“There's so many wonderful organizations and opportunities out there for the differently-abled population that many people don't know about and the more we can advocate for that, I think it can only enrich peoples' lives,” Mia's mother Cindi Sollars said.

Hastings and Cindi Sollars tell ABC 57 they hope to see this program grow here in Michiana, but they say for now they are more than happy to welcome Mia into their dug out as one of their own.