Team Owner: "It was a good year for the Silver Hawks, but I'm not satisfied yet." 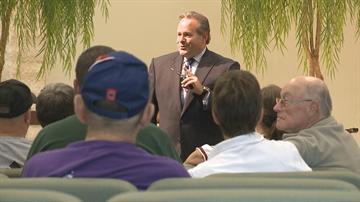 SOUTH BEND, Ind. – The owner of the South Bend Silver Hawks said he was pleased with the rise in attendance during the 2012 season, but said he wasn’t satisfied with the numbers and hopes to make 2013 a record year at a town hall meeting on Tuesday night.

Owner Andrew Berlin and Silver Hawks President Joe Hart were joined by dozens of fans at Tuesday’s meeting at the Kroc Center.  Before the 2012 season begin a similar meeting was held to update the community on renovations to Coveleski Stadium and to get input from the public about what could improve the fan experience to “The Cove.”  Tuesday’s meeting was similar, providing some results of the season and sharing ideas for the future.

Among the fans who attended was Vern Stanley, who has held season tickets ever since minor league baseball first came to South Bend.  Stanley said he was optimistic about the future growth of the team and Coveleski Stadium because of the attendance this season.

"Well it was surprising to say the least,” Stanley explained.  “I mean having been here every year and seeing it go down, this was a welcome sight."

Indeed, attendance improved dramatically.  Just 47 games into the season the number of fans coming out to games surpassed 2011’s attendance levels.  Andrew Berlin, however, said he wasn’t satisfied with the numbers.

During their presentation, Berlin and Hart explained that they are planning to invest more money into making additional improvements to the stadium to improve the fan experience and attendance.  Work is already underway to improve the quality of food at The Cove and service by employees at the stadium.  Work is also being done to improve the public address system and they are looking at adding a second score board.  They’re also looking at and accepting other proposals for more attractions at the field.

"We're going to see more improvements to the park,” Berlin explained.  “We haven't made any final decisions about what they're going to be."

Among the options being looked at are building a “party deck,” adding more flags and pendants that would be visible across the city and constructing more suites.  Fans added their own ideas, wishing for everything from more parking to broadcasting games live on TV and radio.  Berlin said they were looking into many possibilities.

Berlin also reaffirmed his commitment to improving not only Coveleski Stadium, but bringing more people and business to downtown South Bend.  In addition to attracting fans to games, concerts and other events are expected to be held at The Cove next year.

"There are officials with the city who have told me that developers are sniffing around The Cove right now," Berlin explained.  “Because, like any business, if you have 200,000 or maybe 300,000 people milling around in that area of South Bend that’s where developers are going to set-up shopping, housing, hotels, whatever the case may be.”

If you have any ideas for improving Coveleski Stadium and the fan experience you are invited to email your tips to: hawks@silverhawks.com