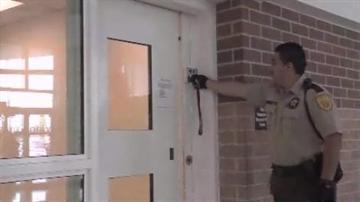 ST. JOSEPH COUNTY, Ind. -- Officers at the St. Joseph County Jail are dealing with a technical glitch that means they have to manually open and close jail cells.

Early last week the automatic unlocking system began cutting out at the jail. Officials say weather may be to blame.

There have been no security breaches and there are no security risks related to the malfunction, but it could be more than just a short-lived inconvenience.

"We are basically operating all doors in here manually,” said Decker.

Usually, the Master Control Center automatically operates doors throughout the facility by looking through surveillance cameras.

But now, each door must be opened and closed with a key.

"It's just become labor intensive because we operate now with quite a few fewer corrections officers than we had in the past because of the ease of technology. What two people could do or have been doing took 6 people before,” said Decker.

Officers are clocking 5 to 6 hours of overtime to just make up for manually operating the doors.

A fix for the glitch isn't even in sight.

"The company says that we may very well have to purchase a new system if this one can't be repaired soon,” said Decker.

All doors in the facility are locked at all times. The glitch is only in the master control switches.

Parts have been ordered to try and repair the problem. But it is still unclear what exactly the problem is.