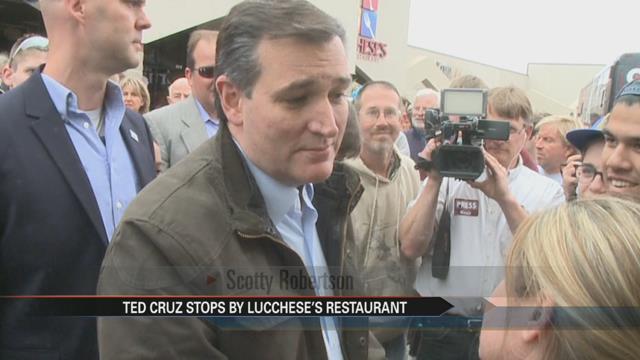 Hundreds of people lined up to see the candidate.

Some were more excited to see his new running mate Carly Fiorina.

Both candidates stopped to speak to many people in the crowd.

Cruz supporter Scotty Robertson showed up at 10 a.m. just to make sure he could meet his favorite candidate.

“It’s a once in a lifetime kind of thing,” Robertson said.

Ted Cruz spoke one on one with the crowd about everything from his kids to what he wants to do about the economy.

“I feel wonderful and I have all my support behind him,” Enfield said.

Many others shared Enfield’s sentiments.

But there were some undecided voters at Lucchese’s, curious to hear Cruz plead his case for the Hoosier vote.

“I’m not going to say it’s going to sway me one way or the other,”  Joe Patton, an undecided conservative said.

Some protestors even showed up, some supporting candidate Bernie Sanders.

Majority of the crowd seemed to be supporting Cruz.

Some were overwhelmed with joy to meet him.