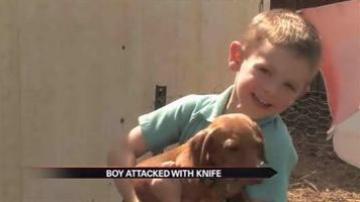 Police said a 14-year-old cut a 5-year-old boy several times with a pocket knife in a neighborhood off of County Road 17.

ABC 57 News talked with the little boy's parents. Late this afternoon, the little boy, Ethan, and his mother Britny Stump, met with a team of detectives that specialize in child interviews.

Ethan's parents are very concerned and said they want people to know what happened so more children can come forward if they were hurt by the boy as well. This evening after Britny returned home from meeting with detectives she told ABC 57 that detectives told her two other children and their parents have come forward stating that incidents have happened involving the same teenager.

Britny said after Ethan told her and her husband what happened late last night, "the first thing I did was call the police, I wanted to file a police report."

Captain Jim Bradberry with the Elkhart County Sheriff's Department said detectives are investigating the alleged incident and tell us the teenager does not live in the neighborhood off of CR 17, but he does stay frequently at a relatives house who does live in the neighborhood. He would not say where the teen resides, but Britny said the teen lives in Michigan and attends Constantine Public Schools.

"Ethan said he did it with a pocket knife, he made him hold his hands behind his back and he rubbed the knife across his skin," she said.

Captain Bradberry said, "At this point we are still in the early stages of this investigation, so with these cases you have to be sensitive because they are juveniles. We are looking at having certain people come in to do special interviews for children."

"I just want the safety of all the children, so this is why I'm going forth with pressing charges because I don't want this to happen again, not only to my child, but to other children that play in this neighborhood," said Britny.

She wonders where the 14-year-old got the weapon and what were his intentions. "What was going through his head," she said.

Captain Bradberry said, "the one good thing about this incident was the injuries weren't so severe that you know, the child needed medical attention and that wasn't required."