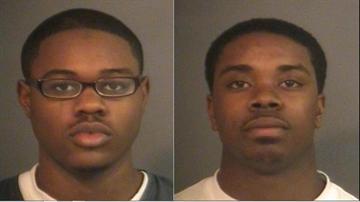 Fowler is past the point of tears.

He's lived on the city's south side for a while now, and has grown accustom to the nightly sound of gunshots.

"It's nothing new," Fowler said. "There's always violence around this area."

So when Fowler found out about Friday night's deadly shooting on Bowman Street, just a few houses down from where he lives, he wasn't surprised.

"I just heard gunshots, I didn't go outside," Fowler said. "I stayed in the house until my family came home."

Police said a 51-year-old Mishawaka man was shot in the face at 1022 Bowman street.

Sixteen-year-old Rayterrior Wheeler, and 18-year-old Herbert Brown III, were arrested in connection with the murder. Wheeler has been charged with murder and Brown was charged with assisting a criminal.

"It worries me, because we have our children with us at times," Geri Peavler, a neighbor, said.

She wasn't at the scene last night, but she still has to deal with the aftermath.

"We will be looking for another place," Peavler said. "This is probably the third place since 2006."

She helps run a non-profit that works with kids.

She said this sort of violence limits the outreach they can do.

Area crime prevents people from checking out her mission and getting involved.

So much so, that she's planning to move.

For neighbors like Peavler and Fowler, Friday night is just one more thing dragging the block down.

"No matter what changes happen in the neighborhood, there's always going to be people who think they're gangbangers," Fowler said.