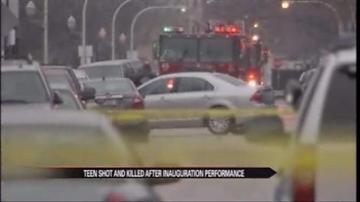 CHICAGO -- A Chicago teen was shot and killed just one week after performing at President Obama's inauguration.

The 15-year-old girl was shot just blocks from her school on the south side.

The teen was a member of the King College Prep School's band who performed in D.C. last week.

Police said a man jumped a fence and ran towards a group of 10 to 12 friends taking cover from the rain. Two other teenagers were shot as the students scattered.

The area where the students were standing is a known gang area and police believe the shooter mistook the group of kids for gang members.