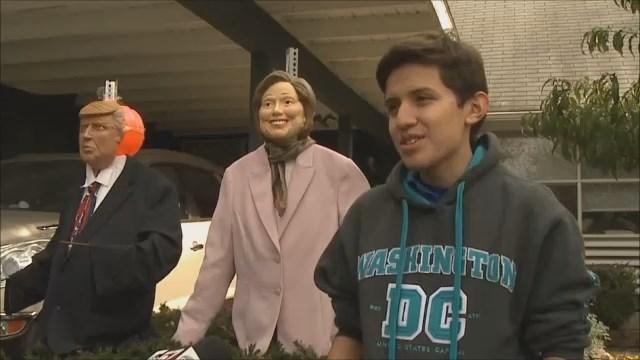 “And I thought no, if you put Trump, we are in trouble,” said Taide Galvez.

One South Bend home is catching lots of attention for their Halloween display this year, and it’s not because of the spiders or ghosts.

“Just in the spirit of everything that’s going on, the elections and so forth and he thought that Donald Trump was going to be scary as heck. So he said ‘mom, we don’t need a mummy, we don’t need skeletons, I think if we just put him outside by himself that should be enough’,” said Galvez, the mother in the home.

15-year-old Alex Almanza took initiative and placed Donald Trump outside as part of that display on Brookton Drive.

“Since I can do a really good impersonation of him I was like, ‘yea we’ll put Donald Trump',” said Almanza, Galvez's son.

You heard it right; Alex got the idea after practicing Donald Trump impressions.

He gave an impression right then and there.

But mom wasn’t too fond of Donald being the only one out front.

“A week later I said 'are you missing something' and he said ‘no I’m not’ and I said ‘please Alex do not leave the Troll outside by himself'. So I convinced him to put Hillary next to him. So I think that will help die down the situation,” said Galvez.

The public’s reaction so far—

“And so far all of our windows are ok,” said Galvez.

And the rest of the family is already preparing for next year.