Teen pregnancy rates declining in the US 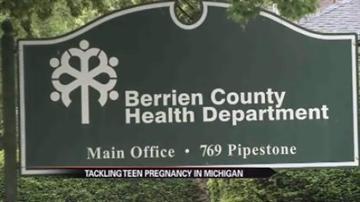 BERRIEN COUNTY, Mich. -- The CDC released a new report Thursday showing teen pregnancy rates are at near record lows across the country. That trend is proving true in Benton Harbor, which has seen a reduction in teenage pregnancy rates.

Just last year that number dropped down to only 62.

Berrien County Health Department Epidemiologist Yasi Back says the numbers are headed in the right direction.

"If you compare it to five years ago, it's down significantly for our county, for Michigan and nationally,” said Back.

Berrien County's rate is higher than other counties across Michigan, but it's finally on the decline for a few reasons.

"We have always been known as a city full of violence and single parent families, so to hear that the pregnancy rate is going down in our community is great news,” said John Howard, Benton Harbor Boys and Girls Club.

Howard says he plans to talk to the students about declining pregnancy numbers- and encourage them to continue the trend.

"Our young people should be given pats on the back. Not just for not being pregnant, but also for being productive citizens within our community,” said Howard.