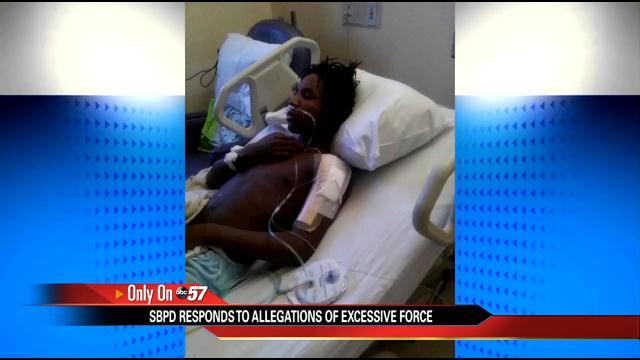 A 15-year-old claims South Bend Police Officers used excessive force to take him down following a pursuit. The topic of excessive force and police brutality has been making headlines for months now.

15-year-old Jacob Pittman said he thought he was going to die when he ran from police and they tackled him.

Pittman said, “With all the things I'd been seeing on the news about Michael Brown and all that, I felt like I was going to die because of the way they treated me.”

Pittman said he was in the hospital for 10 days recovering from his injuries.

Pittman said, “When I felt my arm go back I felt pressure, and I just heard it snap and I was like ah! I couldn't really feel it because of adrenaline and then the knee came right after that and then the other officer put his boot on my head and pressed my head against the concrete and he jammed his finger in my mouth and I couldn't eat for a few days because my mouth was so sore.”

Pittman said he knows that fleeing from police is wrong, but he decided to talk with ABC57 because he doesn't want another teenager to experience what happened to him.

Pittman said, “There's a lot of stuff I'm not going to be able to do because of my arm and this injury. I know it's serious. 2 metal plates, 3 screws, and 4 surgeries? Come on now.”

Pittman said he can't work or play sports because the mobility in his arm is limited right now. So what happened to incite that much force?

Pittman said, “I guess they thought we was about to break into a car or whatever so you know when we seen the lights, we took off running because you know, who stays around when the police come in especially when you're smoking or something.”

Pittman said he was "look-out" for a friend and they were smoking weed and "look into cars." However his story was not consistent.

Captain Phil Trent with the South Bend Police Department said the scenario was quite different.

Trent said, “The individual was witnessed taking a brick, smashing out a car window, grabbing a backpack, from the vehicle which was parked in the area of Eddy Street Commons.”

Trent said police pursued Pittman for several blocks and spotted the backpack in his possession. Trent said it was full of electronics and belonged to a graduate student.

Trent said, “After a lengthy pursuit, the individual turned around, faced the officer, he told the officer quote ‘You're going to have to shoot me,' at which point our officer had no idea what was going to happen next.”

Pittman said he was not armed during the incident. But police said at that point they had no idea if he was carrying a weapon or not.

Trent said the backpack was returned to the owner. So far, no charges in the larceny case have been filed but Trent said Pittman was arrested on an outstanding warrant that he cannot disclose because Pittman is a minor.

Trent said, “In this case just like every other use of force case, use force necessary to affect the arrest, that's what we are teaching officers coast to coast.”

Pittman said he knows he was in the wrong, but he thought they were going to kill him.

Pittman said, “But then again ya'll shouldn't have used aggressive force like ya'll did. I'm still a minor, I seen what they did with my own eyes, and I know that's wrong, that's police brutality, especially to me as a kid.”

Pittman's mother filed an official complaint against the officers involved on Friday.