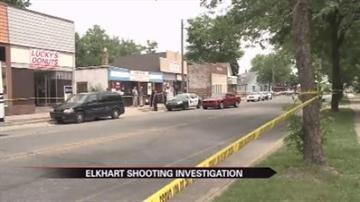 ELKHART, Ind. -- A teenager was shot Thursday around noon outside an Elkhart convenience store on Indiana Avenue.

Witnesses said four men were standing in an alley between Lucky’s Donuts and the Stop ‘n Go convenience store when another man rode up on a bicycle. About 30 seconds later, shots were fired and one man was shot.

It was just before noon Thursday, when Haas heard the two gunshots that were reportedly fired at his friend.

"I was outside standing on my porch, the sidewalk. I heard a couple gunshots, came down here talked to a couple people. They told me who was shot and it was a close friend of mine,” said Haas.

Haas didn't want to release his friend's name. But says he has an idea of why this may have happened.

"I'm not real clear on what the motive was but he was a gang member, so that has to be what it was,” said Haas.

Gangs are something the neighborhood is all too familiar with.

Several people on scene said the violence in this neighborhood is out of control.

"Probably like the fourth shooting in a month. It happens a lot. It just goes undetected like, police get called and that's it. If nobody gets shot, you don't hear nothing else of it. It's just a local shooting. That's it,” said Haas.

For Haas, and other parents on the block, their biggest concern is for the safety of their kids.

"I got kids. I got a five year old that walks down here and if he were to get shot I don't know what I'd do. They need to stop it really, it's crazy,” said Haas.

Police say the investigation is ongoing.

They believe the suspects ran from the scene.