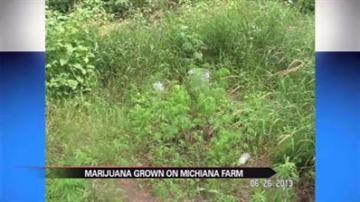 BREMEN, Ind. – Indiana State Police say three teens who can’t even drive yet were caught growing marijuana on a farmer’s land. Over 100 plants were seized.

Calvin Ralston, the landowner, was shocked and is still pretty upset.

"I drove down into our little woods down there and I was just looking for a spot to get rid of a little bit of dirt, and I spotted a five gallon bucket in the woods that shouldn't have been there. I knew that I didn't put it there and I drove over by it and I looked closer and it was full of dirt and in it was a marijuana plant,” said Ralston.

Ralston uses a spray on all of his plants, so it is unusual that the marijuana plants were even able to grow on the land.

"The chemicals we use to spray the crops kills the marijuana. So normally if there is some it would get killed by the crop spraying and so it is very rarely that I see any,” said Ralston.

State police say they were informed of the marijuana the first week of June and in the following weeks they were able to capture images of the suspects tending to the plants.

One was in his local Little League uniform.

Police were able to identify the kids with the assistance of school officials.

The marijuana has been removed and taken into evidence. The case was turned over to the Marshall County Prosecutor’s Office for review.

A decision will be made in a couple of weeks.