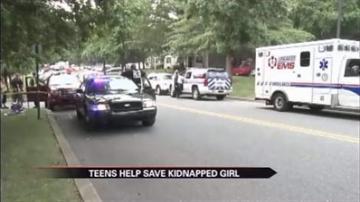 LANCASTER, Penn. -- Two Pennsylvania teens are being hailed as heroes for helping save a little girl from her kidnapper.

The five-year-old was playing in her yard when a man offered to buy her ice cream, snatched her, and took off.

The 15-year-olds saw her picture- and eventually spotted her in a car.

They chased the car down on their bicycles eventually getting the driver to stop and let the girl out safely.

"As soon as the guy started noticing that we were chasing him, he stopped at the end of the hill and let her out and she ran to me and said that she needed her mom," said one of the boys, Temar Boggs.

The national center for missing and exploiting says the first 3 hours a child is missing are the most critical. Thanks to the teens, the little girl was found in just 2 hours.