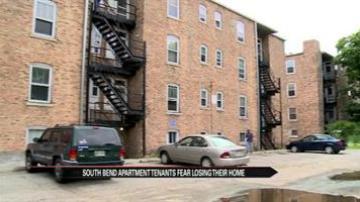 SOUTH BEND, Ind. -- Tenants at Washington Colfax Apartments say the place is in complete disrepair and even the maintenance workers have reached their wits end.

Residents are happy the city is getting involved, but are worried about where they will go if the city shuts the complex down.

Resident Julio Bermudez, who is also on the maintenance staff, said he lives at the complex because it is his only option.

Residents say the place is a complete mess, but Bermudez says he can't get the money or the tools to properly fix things.

"My biggest problem is not being able to take care of the needs of the tenants," said Bermudez.

Dana Pokorny lives in the complex. Her ceiling fell to the floor - and it rains inside her apartment when it rains outside.

She says the owner hasn't fixed the problem yet.

"He says he's tried to fix it 2 or 3 times but the water still comes in. It rolls down my walls- the new tiles they put in are stained," said Pokorny.

Code enforcement sent multiple letters to the complex's owners who live across the country.

The hearing with code enforcement is a last ditch effort to get the owners to address the problems.

Until then, residents say they're standing by.

"It's very upsetting that it had to come down to a hearing. And the fact that nothing is being done and people could be without homes and nowhere to go," said Pokorny.

When we talked to the spokesman for the apartment complex last month, he issued a statement saying they do whatever it takes to respond to tenants needs.