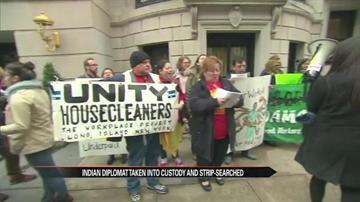 NEW YORK — Diplomatic tensions continue to grow between the United Stattes and India over the arrest of a diplomat in New York.

India's deputy consul general was arrested, strip-searched and charged with lying on a Visa application about her housekeeper's pay.

The arrest has sparked anti-American protests in India. And the government has demanded an apology over the arrest.

The foreign minister says charges should be dropped if there's no evidence of wrongdoing.

"I think it's important that we understand this is a valuable relationship for both sides, there's a huge amount of investment, both public and private, into this relationship," said Foreign Minister Salman Khurshid. "And I don't think the world wants a relationship like this to deteriorate at all."