Tensions rise between US and North Korea 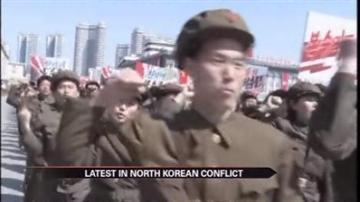 Tensions continue to rise between North Korea and the US.

The US and South Korean military are keeping constant watch on any movements that North Korea could make after it declared a state of war with South Korea.

The North Korean media warns that it could develop into an all-out nuclear war.

This is all following Kim Jong Un's order to put the nation's rockets on standby.

Experts say an attack on the US is highly unlikely.