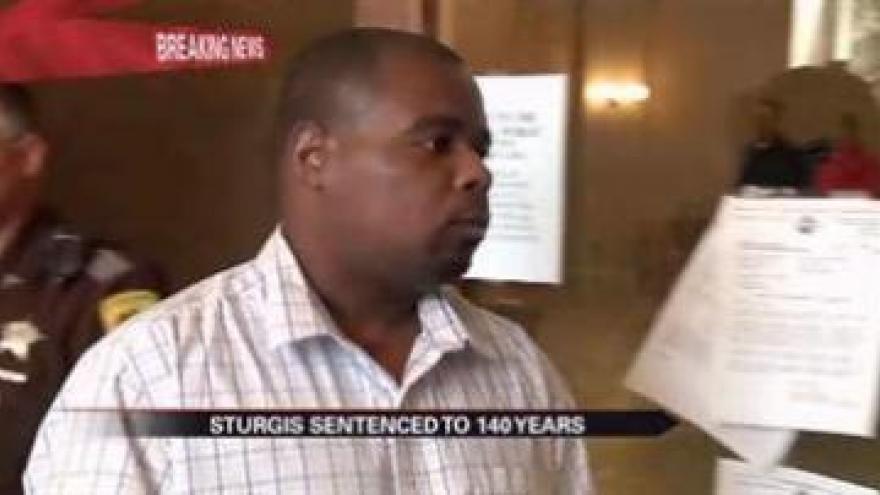 On May 24, the jury found Terry Sturgis guilty on all 14 counts stemming from the November beating death of his 10-year-old son, Tramelle, and the battery of his 14-year-old son, TJ and his youngest son Terrance.

On Thursday afternoon, Judge Jane Woodward-Miller handed down a sentence for the acts of abuse that ended in murder.

Sturgis was sentenced to 140 years in prison.

The judge said that Sturgis showed a "stunning lack of remorse," and emphasized her judgment was brought on by the "worst of the worst".

She went on to add that "in my 12 years of dealing with violent crimes and child crimes, I've never seen anything like this."

Here's how the punishment breaks down:

The total sentence, minus the murder charges, is 28 years.

In court, Sturgis spoke for the first time about the night of Tramelle's murder.

Sturgis claims the prosecution and his own childrens’ testimonies failed to acknowledge some of the facts.

Sturgis spoke in front of a packed court room Thursday afternoon, apologizing for his actions and attempting to justify the murder of his 10-year-old-son, Tramelle.

Sturgis claimed he was under the influence of prescription medication, street drugs and alcohol the night of Tramelle’s death. He says he came into the house and found his daughter crying- claiming Tramelle had molested her. He says based on his intoxication and the state of his daughter, he didn’t know how else to punish Tramelle.

According to Tramelle’s mother and aunt, Sturgis’ story is a lie.

Judge Jane Woodward-Miller disregarded Sturgis’ excuses. She said “he showed a stunning lack of remorse” and that this case was “the worst of the worst.”

“Potential, like the judge said is gone and we can never get it back,” said Townsend. “So there’s never really a sense of justice.”

After rehashing her notes from the trial, the Judge ruled that based on the heinous nature of Tramelle’s death and the horrific abuse to the other children, Sturgis is sentenced to 140 years in prison.

“We’re as happy as we can be as far as the sentencing,” said Townsend. “We believe that the law did it’s job in sentencing Terry.”

Just before closing, Judge Miller added that no sentence could be long enough for Sturgis and if she was not bound by Indiana law, she would make his time longer. She cited the emotional and physical scars Tramelle’s siblings must carry for the rest of their lives.

Tramelle’s family says the children will only get through this tough time with their brother’s help.

“He is their guardian angel,” wept Townsend. “He will watch over his brothers and his sisters. He’s watching over all of us.”

Sturgis apologized several times for his actions when he had his opportunity to speak today but focused more on explaining the circumstances surrounding the incident.